The Khoros Care Automation Framework and Bot API v3 enable automation services, aka "bots," that you'd like to integrate into the Khoros engagement platform (the underlying technology of Khoros Care and Messaging). The Khoros Automation Framework is agnostic and so provides the flexibility you need to easily and quickly add automation services of your choosing to your workflow, allowing you to use the technology and providers that best match your business needs.

While you can use the same bot across multiple source channels or use separate bots for different channels, the Framework currently allows only a single chatbot integration per individual social business page or handle on any given source channel.

The Khoros Automation Framework and Bot API work together: the framework guides the development of your automation services while the Bot API provides the tools to register your services, implemented as a webhook, with the Khoros platform.

Using the Bot API you can:

The Automation Framework acts as an intermediary between your service, or "bot," and Khoros Care. Your brand's bot registers a webhook with Khoros to receive messages/events. Bot registration is a one-time action per bot for each network. If you are using the same bot for multiple networks, you'll use the same App ID (appId) for each registration with a unique Network ID (network) for each network. Once the webhook is registered, your automation service is able to use the Bot v3 API. 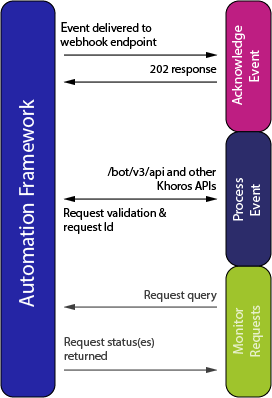 The following sections give more detail about the Automation Framework architecture and workflows.

You must immediately acknowledge every event that you receive from the Framework. Khoros uses acknowledgment of the event to monitor the health of your endpoint. The Framework's built-in automatic handoff workflow ensures that conversations do not get “stuck” if your bot enters an unhealthy state. Notifications alert you to degraded and unavailable endpoints.

You will perform different actions depending on the purpose of your automation - in the case of a chatbot, the automation will figure out and send a response. In another use case, you might query and update CRM and Case systems, detect intent and tag the message, assign a priority or route the conversation, or calculate suggested agent responses. Here are a few common implementations you can use with the Automation Framework:

While planning your bot implementation, there are several common bot workflows to consider:

Events Delivered to your Bot

See Working with webhooks for details on each.

We define and monitor the health of a registered bot based on the response to events delivered by the Automation Framework. (A 200 or 202 response returned from a bot signals a successful delivery.)

Your bot will be in one of three possible health states: HEALTHY, DEGRADED, or DOWN.

Khoros calculates your health state based on the number of delivery successes and failures during the last 2 minutes. The Automation Framework defines a delivery attempt a failure after a timeout or a non-2xx response from the bot.

Our health calculations take into account only final delivery attempts made in last 2 minutes. If we are retrying a failed delivery, for example, and the second retry succeeds within the 2-minute period, the first failure is not counted in the bot health calculation.

If the Framework detects any kind of error or failure while trying to connect to or deliver a message, the Framework retries the delivery once, after a short delay of less than 1 second.

Delivery errors that trigger retries include:

If the delivery fails again after the retry attempt, the delivery is marked as a failure. See our Webhook section under Best Practices for using the x-amzn-RequestId found in the response header to check for duplicate messages.

Note: You can see these tags in Khoros Care and monitor for the tag in Care Analytics using a Smart View applied to an appropriate widget.

The Framework will not send any bot health notification email for a single bot appId more than once every 2 minutes.

If the bot health status is DOWN or DEGRADED and remains in one of these states over an extended time period, we will send an additional notification every 30 minutes.

Actions your Bot can take

Actions the Framework may take on behalf of your bot

Some changes, such as the state of a bot or a conversation, result in actions undertaken by the Framework itself. Examples include:

In each handoff instance, both the legacy Bot Handoff and the appropriate child handoff tag is applied to the conversation.

Khoros Flow and the Automation Framework

Khoros Flow is an excellent chatbot tool that works great with the Automation Framework. Khoros Flow is the solution of choice that we use in our own automated chatbot used throughout our websites, Maia.

You can find out more about how we used Flow.ai to build Maia in these blog posts:

Updated over 1 year ago

Get started working with the Automation Framework using these guides.