Secure Transfer is a proprietary solution within Khoros Care that gives brands the ability to bring conversations originating from third-party social networks to a secure messaging channel without losing critical contextual information from one channel to the next.

For brands, it means being able to address customer issues without putting sensitive customer information at unnecessary risk. It means building a contextual relationship with customers that links their social media profiles with your authenticated customer record. Furthermore, it enables you to more efficiently handle incoming customer requests from any channel.

For a brand's customers, it means peace of mind knowing that they can have their inquiries answered and issues resolved in a secure online environment. It demonstrates the brand's dedication to the security of its customers' information and creates a consistent customer service experience regardless of how the customer initially reaches out.

In this guide, we will cover how to set up and configure the Secure Transfer process for your brand. We will also share best practices and tips to help you get the most out of Secure Transfer and to use it with other Khoros Care features to maximize efficiency and achieve an industry-leading customer service experience.

The Secure Transfer process provides a mechanism for a smooth transition of a conversation from a third-party channel to a secure channel that is under the brand's control. 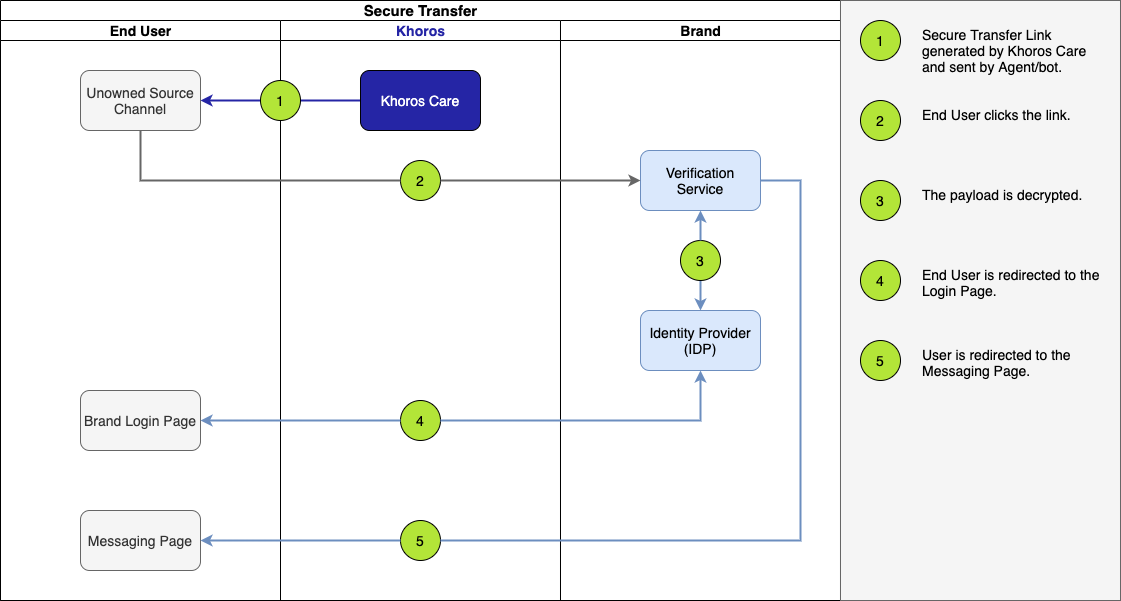 Here is an example of how the user/Agent flow works:

The portal can be built, hosted, and maintained by Khoros via a Services contract, or built and delivered by the brand’s IT department.

In this guide, we will cover each step of the Secure Transfer process, how to create and configure your Secure Chat page, and how to maximize customer success through best practices.

Step One: Send the Transfer Link

When a conversation is ready to be transferred to a secure chat, the Agent initiates the transfer by sending a shortened transfer link to the end-user. This is easily accomplished within the Khoros Care interface. Here's how: 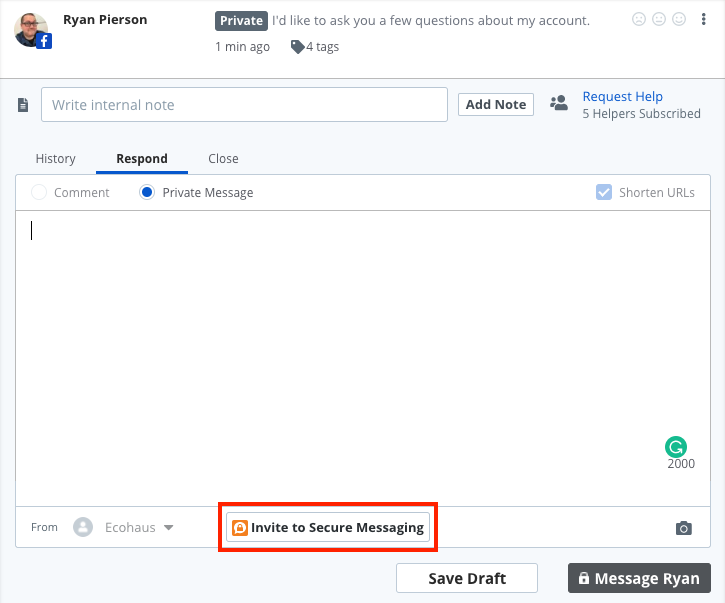 Within the conversation panel, select the Invite to Secure Messaging button to generate a short message inviting the end-user to a secured chat experience. The message uses the same language as the conversation. 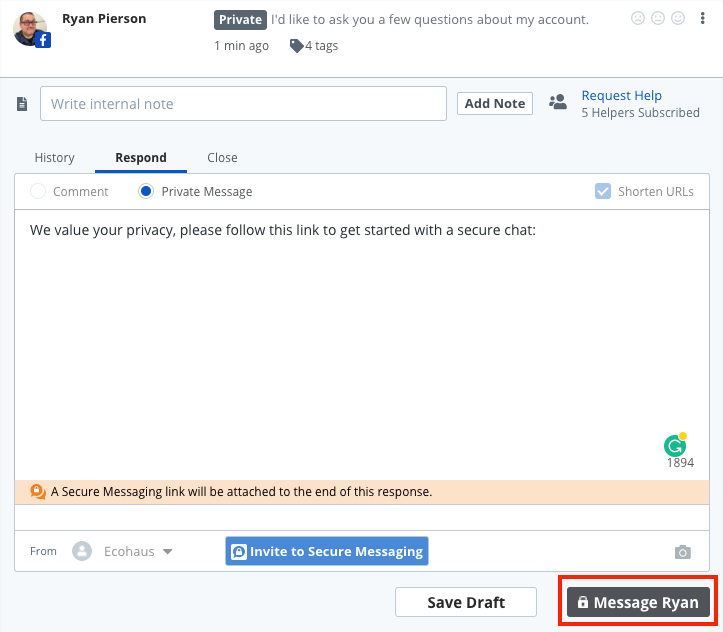 The link itself does not appear in the conversation panel. Instead, it is appended to the end of the message as it is being sent, preventing any accidental following of the link by the agent. Only the end-user can see and follow the link. 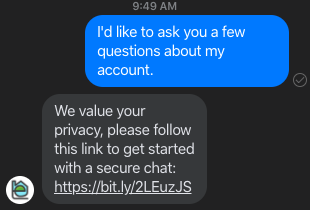 The link sends the customer to the verification portal. The URL to this portal must be provided by the brand if the brand is configuring Secure Transfer.

The link includes an encrypted payload that will contain information such as the channel the conversation was initiated through, the Agent ID associated with the conversation, etc. See the Payload section for more information about the data passed along through the generated link.

The encrypted payload is appended to the link to the portal where the secure conversation will take place. Here is a short example:

Each unique Secure Transfer link includes an encrypted payload that passes along information about the conversation ahead of its initialization through the secure chat. This contextual information helps brands link various social media accounts and other third-party channel information to their primary customer record.

An example of payload decryption is outlined in the Decryption Java Package section.

The decryption of the payload requires two components:

The payload includes these fields:

At this point, the customer has been directed to the secure chat URL, the payload has been decrypted, and we're ready to identify the end-user on the brand's side.

Let's say the end-user is a customer of an e-commerce site checking on the status of their order. The brand would need to have that customer log in to verify their identity before sharing any sensitive account information.

Before the secure chat initiates, the end-user would be directed to the brand's identity provider.

Once the customer's identity is confirmed, they can then be directed to the messaging page to continue the conversation in a secure, authenticated state.

If you do not wish to require users to log in, allowing unauthenticated or anonymous flow, you can redirect to the messaging page. Khoros can help enable a pre-chat form. The form can collect any fields that you're interested in (e.g., email) before the conversation starts. That way, Agents enter into the conversation knowing with whom they are chatting.

To load the messaging widget, you need to load Khoros provided JavaScript on the page, and inject a handful of fields. These fields include:

All of the values of the fields, with the exception of givenName, are provided by the payload. givenName is passed along by your identity provider.

Here's an example of the full script:

In order for the user to be authenticated against the widget, the brand must generate a JWT token with the user's unique userId and pass it to the messaging widget.

This enables Agents to verify who the user is before discussing potentially sensitive information or performing actions with the user's account.

Khoros recommends that the userId be sourced from the identity provider (IDP). That way, the user's conversation history carries over from device to device.

Here is an example of the code that generates the token. To get the KEY_ID and SECRET, contact Khoros support.

The KEY_ID and SECRET should never be revealed to the user.

There is an advanced use-case where the verification portal redirects the user to a deep link within a mobile app (and prompts the installation of it). If Brand Messenger is already being used in the mobile app, Khoros would like to discuss this option with you.

The Agent can move on or pick up the conversation by selecting the link that appears in the original conversation from Agent View. 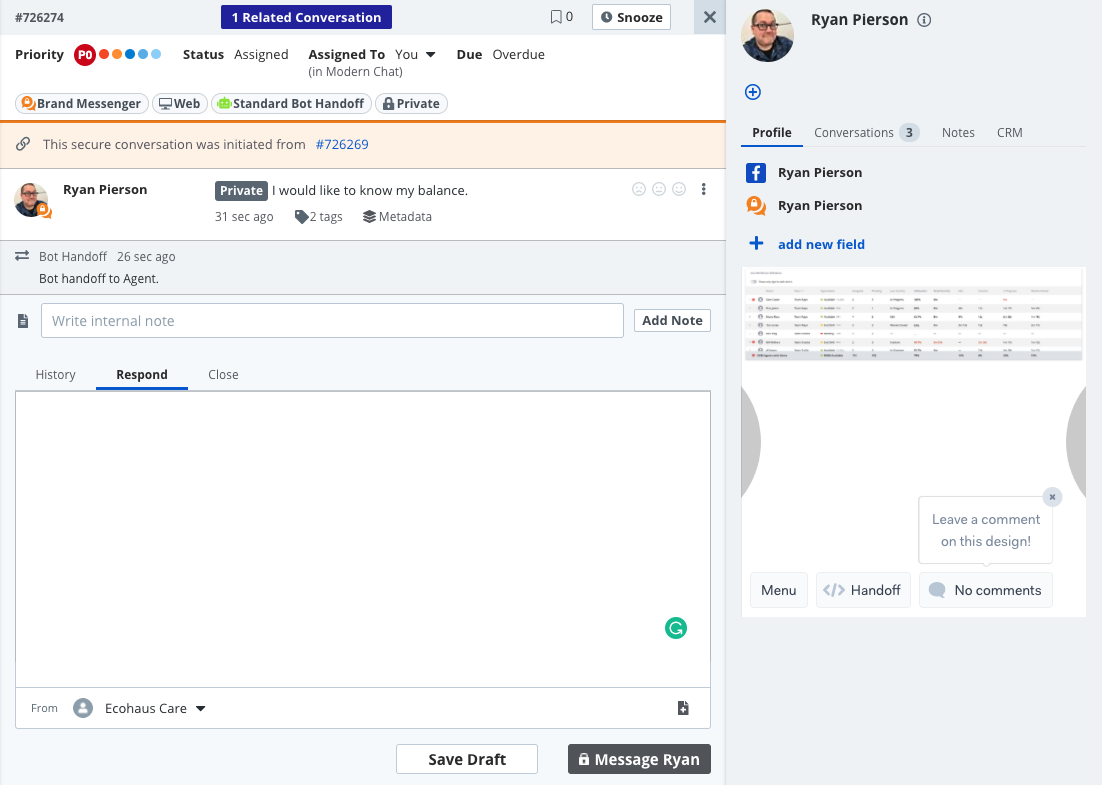 Once the conversation is picked up, the Agent will see a link leading back to the original source channel conversation, as well as to see that both profiles are now linked in the system.

In this section, we look at the Java package used to decrypt the payload sent through the link used to initiate a secure chat with the end-user. We will also examine an example of this package in use.

The following code initiates the decryption of the payload using the files in the Java package outlined afterward.

This is the main interface.

This is the class that implements the interface.

This class serves the simple purpose of initiating an exception message should something go awry during the encryption/decryption process.